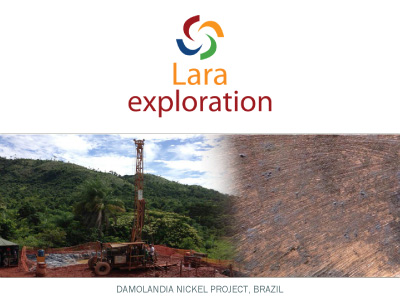 The Damolândia Nickel Project comprises an exploration licence with an area of 1,800 hectares covering a late Proterozoic-aged mafic-ultramafic complex, hosted in a high-grade metamorphic terrain in central Goiás State. A number of similar nickel-copper occurrences are known in the region and one, Americano do Brasil, which has recently suspended mining operations, had a historic reserve of 4.98 Mt at 0.62% Ni and 0.65% Cu. Lara is acquiring a 100% interest in the Damolândia property for staged cash payments totaling US$580,000 (US$30,000 paid to date) and paying a 1% NSR royalty on any production (Lara retains the right to purchase this royalty for a cash payment of US$2 million).

Lara review of historical data and additional confirmation fieldwork has identified potential for disseminated and stringer-style sulphide nickel-copper-cobalt (“Ni-Cu-Co”) mineralization that has either not been, or at best only partially tested by historic drill programs.

Detailed geological mapping was carried out to define the aerial extent of the mafic and ultramafic rocks comprising the Damolândia mafic-ultramafic complex and historic drill core was located and examined. A re-evaluation was carried out on all historic geochemical rock and soil sampling data and of the ground and airborne geophysical surveys (Magnetics, IP and VTEM). The complex is 8km long (East-West) by 6km wide (north-south) and is dominated by mafic diorites, gabbros and gabbronorites. It is intruded by two ultramafic units dominated by layered pyroxene and olivine-rich cumulate rocks (pyroxenites-websterites and peridotite-lherzolites). These units can be as much as 150m thick and are interpreted to represent magma channels developed within the gabbros. These are located in the southwest and central parts of the complex and are denominated the Damolândia and Central Ni-Cu-Co target areas, respectively.

Historic soil geochemistry data at both targets shows coincident zones, hundreds of meters long and up to several hundreds of meters wide, with anomalous nickel, copper and cobalt values. The drill core examination indicated that pyrrhotite is the main sulphide mineral and is accompanied by pentlandite, lesser amounts of chalcopyrite and minor pyrite. The sulphides occur as disseminations, small blebs or as fine mm-wide veinlets and fill in fractures formed during deformation and granulite-facies metamorphism. No deleterious elements have been reported in the sulphide zones.

The Damolândia target is between 600m and 700m long and was tested (in 2007-2008) by 6 historical diamond drill holes, four of which are located with a nominal 100m spacing along the central and western parts of the target zone, representing a strike length of approximately 450m. All four holes intersected significant wide low-grade disseminated sulphide nickel mineralization associated with low but anomalous copper and cobalt values (see Table-1 below for details). One of the other two holes, hole DM-01, located 300m to the east is interpreted to have only intersected part of the near surface oxidised portion of the sulphide bearing zone. The remaining hole (DM-04) on the same drill section and located 100m to the south of DM-01, is interpreted to have been positioned to the south and off the east-west mineralized trend.

The mineralized zones are interpreted to be part of a steep north dipping sheet-like mineralized structure with true widths interpreted from between 20m and 32m that are interpreted from the historic drilling to extend to more than 150m vertical depth along the strike length of approximately 450m. Weighted average nickel contents in the holes are from 0.22% to 0.39% Ni, copper contents between 0.08% and 0.18% Cu and cobalt contents between 0.012% and 0.017% Co. The presence of anomalous nickel and copper values in the upper oxide zone section of hole DM-01 suggests that the sulphide nickel mineralization could extend for an additional 200m strike length to the east and possibly as much as 300m further to the east based on the historic soil geochemistry. This section requires further drill testing.

The historical interpretation for the mineralization at the Damolândia target was that it was associated with a gently west-dipping, 20m diameter pipe-like structure, but it is now interpreted as being a sheet-like body associated with layered olivine and pyroxene-rich cumulates, formed in a structurally upturned multi-phase magma channel. The drill data indicate a possible steep southwest-plunge for the mineralized sheet.

Three historic drill holes (holes DM-05, 09 and DM-11) only were drilled to test this large target. Holes DM-05 and DM-011 tested part of the anomalous nickel in soils zone of the eastern lobe. Drill hole DM-05 intersected significant nickel mineralization in the oxide zone of the hole with 19.5m at 0.43% Ni, 0.1% Cu and 0.42 % Co from 5.0m depth down the hole. The hole DM-11, located approximately 250 m southeast from DM-05, did not intersect any significant mineralization and additional drilling is recommended to determine the orientation of the mineralization zone intersected in hole DM-05. The east lobe sulphide target essentially remains untested.

M-09, which was drilled to test the nickel soil anomalies of the western lobe, did not intersect any significant mineralization and additional drilling will be required to intersect the sources of these nickel in soil anomalies.

Industry standard sample procedures and QA-QC methodologies were utilized by the previous operator for the historical drilling. The core was cut in half and then logged, with half retained for reference and half analyzed. Sampling intervals vary from less than 1m in the sulphide-rich intervals up to 3m in weakly to non-mineralized zones. The samples were shipped to SGS/Geosol’s sample preparation laboratory in Goiania, Brazil then to their main laboratory in Belo Horizonte, Brazil for analysis. Following multi-acid digestion, analyses were by ICP for 31 elements and fire assay for precious metals. Check assays include 33 element four-acid ICP and XRF at ALS’ laboratories in Lima, Peru and Vancouver, Canada respectively and by XRF at SGS/Geosol, in Belo Horizonte. The QA-QC procedures also included the insertion of blanks every 40 samples and certified standards every 20 samples. Lara’s team has reviewed the drill core and previous work, including the sampling analyses and QA-QC and has carried out its own check sampling to confirm the location of the historical anomalies.

Michael Bennell, Lara’s Vice President Exploration and a Fellow of the Australasian Institute of Mining and Metallurgy (AusIMM), is a Qualified Person as defined by National Instrument 43-101 Standards of Disclosure for Mineral Projects and has approved the technical disclosure and verified the technical information in this news release.