The Lara Property is located at moderate elevation, 40 km from the Pan American Highway and 400 km south of Lima on the southern coast of Peru. It consists of three mineral concessions, covering an area of 1,800 hectares (18 km2). In January 2010 Lara optioned the property to Redzone Resources Ltd. (“Redzone”), which invested US$2.5 million and issued 850,000 shares over three years, to earn a 55% controlling interest in the project. Lara is currently funding its 45% interest and retains a 1% net smelter royalty on all production from the property.

Positive results from the Phase I drilling campaign led to a mapping and geophysical survey programs in areas of interest in August 2011. Results of the 35 km IP and 70 km total magnetics ground surveys generated 20 additional “Priority One” diamond drill targets at 300 m spacing. The Phase II follow-up diamond drill program was planned with the objective to test the overall size potential of the Lara porphyry. The exploration programs completed to date on the Lara Property have successfully extended the area of known mineralization to approximately 2,000m in an east and west direction and from 500m to 800 m wide from north to south.

The Lara Property is located in southern coastal Peru approximately 400 km southeast from Lima. Access to the property is via the Pan American highway to the town of Palpa and then 32 km of gravel road heading northeast to the property along the valley of Rio Viscus. An 8 km all-terrain road has been constructed from the Rio Viscus to the property. The town of Nazca, 45 km southeast from Palpa, has sufficient infrastructure and supplies to be used as a base of operations, and Palpa has labor and minor amenities. However, power for any mining operation would need to be sourced from the main power grid at Palpa and a new power line would have to be constructed. The nearest port lies 78 km south of Palpa at San Juan de Marcona.

The Lara concession directly affects three communities; Ocaña, Laramate, and Llauta. The property is accessed through the Saramarca village, which is part of the Ocaña district lands. There have been successive agreements with the local communities for access to undertake surface exploration and drilling campaigns.

The successful procurement of all permits [Ministry of Mines (MINEM)/Environment Ministry (OEFA)/Cultural Ministry (CIRA)/Agricultural Ministry (ALA/ANA)] necessary were secured for diamond drilling campaigns. The Ministry of Mines drilling permit for 30 holes in Phase I, and 75 holes in Phase II, was valid to the end of 2014 and the CIRA permits to the end of 2013. As the Lara Property falls within the northeast boundary of the Nazca Lines and Archaeological Reserve an archaeologist and assistant must be contracted prior to and during a drilling campaign in accordance with the Ministry of Culture laws.

The Property is situated within the central portion of the Cretaceous to early Tertiary Coastal Batholith that extends at least 800 km and consists primarily of granodiorite and tonalite. The batholith intrudes meta-sedimentary rocks of the Jurassic-Cretaceous Yura Group. The youngest lithology belongs to the late Tertiary Nazca Group and consists of sub-aerial volcanic flows, agglomerates, breccias and tuffs. The occurrence of the porphyries within this belt is due to tectonic-magmatic factors that have controlled the emplacement of these deposits during the Upper Cretaceous and Middle-Upper Paleocene. The most widespread rock on the property is a quartz-diorite porphyry, which is the principal host of the Cu-Mo mineralization.

The areas were first claimed in 1994 and instigated the first geological reconnaissance mapping and sampling programs. These programs confirmed the existence of a porphyry copper target. The mapping and sampling carried out in 1995 was followed up in 1997 with an induced polarization survey and a five-hole reverse circulation drilling program. The last two holes of this program led to the discovery of a chalcocite-rich, supergene horizon and additional drilling was conducted in two subsequent programs in October 1997 and August 1998. In the three programs a total of 2,742 m of reverse circulation and 134 m of core were drilled.

Plenge Laboratories conducted preliminary metallurgical test work in September 1998. In 1999, Rescan completed a scoping study of the Lara deposit. The scoping study estimated a drill indicated mineral inventory for the central zone of 19.7 M tonnes grading 0.47% copper, using a 0.20% copper cut-off. The scoping study concluded that if greater than 64 M tonnes grading greater than 0.51% copper could be established, a 20,000 tonne per day operation would be economically feasible for a copper price in the range of US $0.90 – US $1.00 per pound range.

In 2007, Lara completed two vertical diamond drill holes totaling 413.8 m within the resource area to confirm the historic values and look at the hypogene zone beneath.

Potentially the greatest scope for improving the mineral resources lies in the core of project, where the current drill pattern leaves a large area untested. Drilling of the Phase I and Phase II campaigns by Redzone, discovered higher chalcopyrite contents than those previously tested and the mineralization can now be considered as a “mixed or transitional” ore type and new test work is necessary to confirm metal recoveries previously reported.

Drilling results from the Lara Project were disclosed by Lara in news releases dated January 21, 2008, January 31, 2011 and February 28, 2012, which can be found in the News section of the Company website and filed on SEDAR (www.sedar.com).

Two Technical Reports have been prepared on the project:

Michael Bennell, Lara’s Vice President Exploration and a Fellow of the Australasian Institute of Mining and Metallurgy (AusIMM), is a Qualified Person as defined by National Instrument 43-101 Standards of Disclosure for Mineral Projects and has approved the technical disclosure and verified the technical information in this project summary. 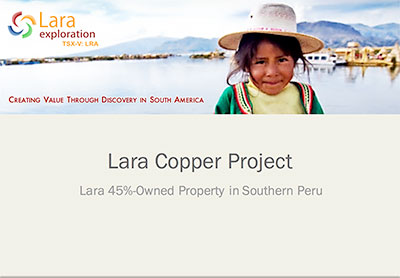